reviewed by Dr Watson for & lit. – The Azed Slip Archive

hen starting a ‘Carte Blanche’ barred puzzle the solver has certain knowledge that the first Across solution will be placed in the top row. It is not certain that it will be placed towards that row’s left hand side – the solver needs to be sure that the second solution at least will fit into the same row. Even then, it is by no means certain that both should be placed within it. For these reasons, it is better to begin with a session of cold-solving, and in this one is reliant on the experience and judgment of the setter. In that regard none could be more reliable than Azed.  Dr Watson found a greater transparency in the clues than he would expect in a normal plain puzzle. When, in the event, he found that solutions filled the edges of the puzzle completely, he was even more appreciative. For Watson, the chance alignment of the ‘M’ in PICK-ME-UP with the opening ‘C’ of CORNETCY gave rise to suspicion of a long light ending in ‘..IC’, and thus MELODRAMATIC was found. The skeleton of the puzzle was established.

As an aid to those reading through the notes below Dr Watson has attached images of the numbered grid and the solution. 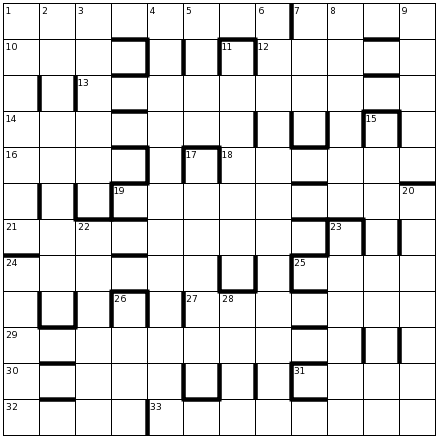 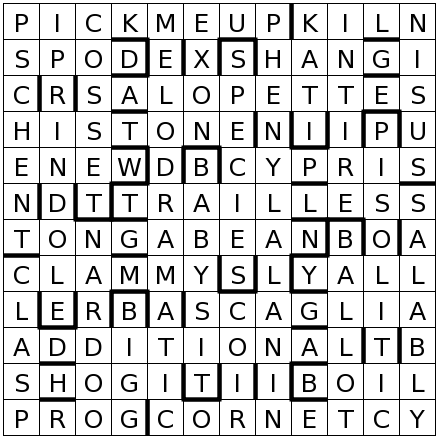 Notes to the clues:

1.       Chance acquaintance embraces this writer, a tonic.  PICK-ME-UP (me in pick-up)  The beauty of this clue lies in its astonishing simplicity, and the amusing correspondence of its parsing. Solvers starting at this clue may have taken another chance that the remaining four spaces of the top row would contain the whole solution to the next across clue.Those who did not realise that they were risking a spoiled grid were lucky in the event.

13.     One in skiing venue botched test – in appropriate gear?  SALOPETTES (a in slope, anag.)  Watson was taken on quite a trek around those ski resorts having a shortish name before arriving at our ‘slope’.The definition caused more anxiety until he was able to accept ‘in’ as a link word to a noun, and not as an integral part of an adverbial solution.

16.     Plunge into lake, e.g. Windermere? ——, getting tangled wit grim reed. ENEW (composite anagram)  This clue caused yet more bother on account of ‘wit’, eventually being taken as a misspelt ‘with’.The composite is then understood as ‘e.g. Windermere’ being an anagram of ‘ENEW, grim reed’.The solution is defined as ‘to plunge into water’ which may mean, amongst many definitions (of ‘water’), a lake. The typo is a most unfortunate error in one of this puzzle’s trickier clues, especially for inexperienced solvers.

18.     Fancy! Prisoner’s fed with such bivalves. CYPRIS (hidden)  Our solution must be taken as referring to the genus, mentioned at the entry for ‘cypris’.

19.     Possibly impenetrable lock securing one wrongfully. TRAILLESS (a, ill, all in tress)  Watson tried ‘tress’ with an anagram of ‘one’ at an early stage.How apt the solution appeared when it was eventually found.A very fine clue.

29.     A divine, I translated Latin including nothing extra. ADDITIONAL (a, DD, I, anag. inc 0)  This is perhaps the most complex of the clues and defied solution until much of the grid was settled.

31.     Gathering in essence led by bishop. BOIL (B, oil; s.v. gather) Here is an example of a clue in which the connection between the solution: ‘boil’ and the given definition: ‘gathering’ is is found at the entry for the latter, greatly assisting the solver if that entry is checked.

1.       Wherein you might see pharaoh’s head, height swathed in perfume? PSCHENT (p, h in scent &lit.)  Without a distinct definition, this clue must be regarded in its entirety as both a definition and a cryptic indication.‘Height’ serves both to indicate its abbreviation: ‘h’ and, in the definition, the sense of highness or majesty. Few will have been allowed close enough to attest to the perfume, but it seems highly likely.

2.       Antidepressant I lug around outside. IPRINDOLE (rind in I, pole2; s.v. lug5)  The conundrum here concerns whether ‘around’ encircles ‘I lug’ or whether ‘I lug’ encircles ‘outside’. Many possible combinations of cryptic elements ensured that this clue remained stubborn of solution.

3.       Pet you can get from Tesco’s. COSSET (anag.)  Azed shows here that a dedicated anagram indication is not always necessary. Immediately apparent.

6.       Nanny he treated with a pill: protein constituent. PHENYLALANIN (anag.)  Poor Nanny – her pill appears to be yet another antidepressant.

8.       I’m flagging around end of marathon, in one piece but antiquated. INTIRE (n in ‘I tire’)  An entire horse, the mighty Yeats, perhaps, four-time winner of the Gold Cup is brilliantly described here.

9.       Striving exists in what represents Japan? NISUS (i.e. ‘is’ in Rising Sun)  This is a more unusual example of the type of clue, more typically exemplified in this puzzle by that for CLASP, where the solver needs the solution before an explanation of its cryptic part is apparent.Here, the possible meanings of ‘what represents Japan’ are limited, and so the clue cannot be criticised as unfair, even by those who regard such clues with distaste. Dr Watson is not of their number, far from it, but has sympathy for inexperienced solvers who may be unused to recognising them.

17.     Endless hell? Girl coming round to give young parents a break. BABYSIT (abys(s) in bit1) A clue with a tellingly apt surface, hinting at the anxiety of the relieved parents being transformed into another kind whilst they are away from home.

20.     Muscle put into excursion in a way that should attract punters. SALABLY (ab in sally)  This, by comparison, could have many different readings, with possible settings at the riverbank, the gym, the January sales and many more.

24.     Bar (of a kind) that converts club into pub. CLASP (i.e. with ‘CL’ as ‘P’)  This is the second clue in which the explanation is grasped by scanning its solution. It could not have been set out in a more transparent manner. A small degree of mental agility is required, not too much to expect of those aspiring to become expert solvers of advanced cryptic crosswords.